Did You Know That…

The earliest settlements by Europeans in this area were due to the logging industry.
In the 1800’s, Chinese work crews dug a series of tunnels through the San Bernardino mountains connecting to Lake Arrowhead.
A narrow gauge steam train ran along what is now “Rim of the World” highway, through Running Springs and into Grass Valley.
The tower that stands in the middle of Lake Arrowhead is 195 feet high and is an outlet for water to the desert below.
The charming Willow Woods, a local shopping community, includes log cabin buildings still in use that date back to the early 1900’s.
Tour companies from all over the United States include Lake Arrowhead on their itineraries.
The San Bernardino Mountains present a spectacular showcase of life by offering visitors over 2,000 species of flora and nearly 400 species of fauna.
The business district of Lake Arrowhead was burned to the ground in the late 1970’s and was rebuilt to current status. The pavilion, which stands in the center of the village, was the only original building preserved.
Many, many movies have been filmed in lake Arrowhead, including “Heidi”, “Magnificent Obsession”, “The American President,” “Space Jam,” and “The Parent Trap.”

In the golden days….

Camp Fleming
Dating to 1922 – at the time, this was one of the biggest and most widely advertised attractions in Lake Arrowhead. Located on the south side of the lake and east of the Village.

Lake Arrowhead Orchestra
Originally a band of students from Whittier College. They played during the summer and recorded a set of songs played at the Pavilion or Casino – the only building remaining from the original “Village”.

Golf Course at
Lake Arrowhead Lodge
This is perhaps one of the earliest views of golf being played in the San Bernardino mountains. This image is from the early 1920’s and today this is the Lake Arrowhead Country Club located in Grass Valley.

Lake Arrowhead Village – 1924
The ‘Village’ opened on June 24, 1922. In 1921 the Arrowhead Reservoir and Power Company, that had lost a long and ugly battle over water rights, sold the lake and surrounding property to a syndicate called the ‘Arrowhead Lake Company’. The new owners were primarily interested in the property and lake for recreation.

Lake Arrowhead near the Village
The boathouse and early bathing cove. Today this is the site of retail stores and the ski school, at the end of the point. The Lake Arrowhead tour boat shown was know as the ‘Blue Jay’. 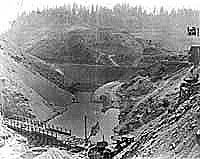 The dam – Little Bear Lake
(Lake Arrowhead) – circa 1905
The dam construction began in 1901. The ‘Arrowhead Reservoir Company’ founded in 1890 had visions of creating a great reservoir to provide water to San Bernardino residents on the south side of the mountains. Nearly 30 years later, this vision evaporated. 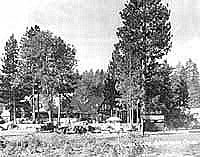 The Village – circa 1930
The ‘Arrowhead Lake Company’, after acquiring the lake and surrounding property, in 1921, began a $8,000,000 improvement program. Included was a Norman English style village, depicted here. The original village was intentionally burned in the 1970’s and replaced by the current ‘Village’ – with only the Casino remaining.

North Shore Tavern
Originally known as the ‘Clubhouse’, built in 1921, to house workers during the construction of the Village. Re-named the North Shore Tavern in the late 1920’s. Now the UCLA Conference Center.

The rich variety of natural resources in the San Bernardino Mountains attracted prehistoric Native Americans to the area for food, water, and seasonal shelter. Today, our mountains are the most heavily “urbanized” mountains in the United States with a deep and rich history. They provide an immensely attractive location for full-time residents and seasonal recreation for visitors from throughout Southern California.
In 1776, Spanish missionary Father Garces passed through Sawpit and Devils Canyons. Other explorers including Kit Carson and Jedediah Strong Smith soon followed. During the Rancho period, the mountains were “harvested” on a part-time basis by fur trappers, and by Spanish landowners seeking the immense stands of virgin timber.
The Mormon settlement of San Bernardino brought roads replacing Indian trails into the mountains. Sawmills subsequently provided much of the lumber used to construct early Los Angeles.
Shortly before the turn of the century the first west-end mountain resorts were established. Real estate development soon followed, and by the 1920s most of our mountain communities had been settled. Improved roads and the development of year-round opportunities for business, leisure, and residence have served to create the area we know today.

Life in the 1500’s
On rare occasions, people could obtain pork and would feel really special. When company came over, they would bring out some bacon and hang it up to show it off. It was a sign of wealth and that the man “could bring home the bacon”. They would cut off a little to share with guests and would all sit around and “chew the fat”.

Movies in the Mountains
The fledgling Moving Picture business came early to our local mountains. The public’s thirst for adventure films was appeased by tales of the great southwest in the form of the “western”. Los Angeles had already become a mecca for the budding industry by 1909. The San Bernardino mountains beckoned the early film makers with the promises of tall timber and grassy meadows. Location shooting was easy because hunting and fishing lodges were already available to house the film crews. Although films were probably already being made in the mountains, the earliest documentation was an item in the Redlands Daily review, January 19, 1913, indicating that the Selig Bear Valley Co. was in our mountains filming “The Cattle Rustlers”. Unfortunately, like so many other early films, this film is “lost” to us.

1913 is also important to our mountain communities because it was the year that Cecil B. DeMille came up to Pinecrest Lodge with a group of actors to film his famous moving picture “The Squaw Man”. This film was considered one of the first to start a trend toward longer films with quality writing and first class actors. DeMille returned to our mountains several more times in the ensuing years with many famous silent stars in including Gloria Swanson.

Our mountains have lent themselves to the western genre of film as well as many a “Mountie” picture. The golden age for film making in the mountains was during the Twenties and Thirties. One old timer recalls that “there were so many companies up here shooting pictures that they were practically tripping over one another.” Many famous films were shot on location in our mountain communities and continue to be made to this day.

For more information regarding the history of Lake Arrowhead: